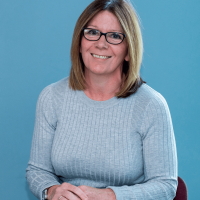 Clare joined Langside College in September 1994 and has worked in a number of support staff roles since then. In 2012, she was appointed as Project Co-ordinator when Anniesland, Cardonald and Langside Colleges agreed to merge, which resulted in a move to the Cardonald campus for one year.  There she worked alongside the Project Manager and the Communications Manager on all aspects of the merger.  This provided Clare with an opportunity to witness how the merger of the three Colleges was approached by the Senior Management, the teaching and support staff, as well as the Stakeholders in Glasgow and beyond. She had a significant role in staff, student and stakeholder engagement before the vesting date of 1st August, allowing her a valuable understanding of the amount of effort which went into the creation of Glasgow Clyde College.

After the vesting date, Clare returned to her substantive role at Glasgow Clyde College where she took up an additional, temporary role, as School Liaison Co-ordinator which provides her with another the opportunity to engage with the pupils and teaching staff from schools in Glasgow.

Clare earned a First Class Honours BA in Social Science (Politics) in July 2020. She became an ACAS accredited Mediator in 2011 which gives her, among other things, very useful conflict resolution skills. In her personal time, she enjoys walking and recreational reading.