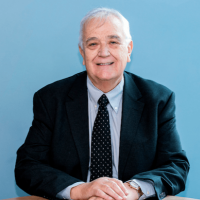 Ed is a Chartered Engineer with a Master’s degree in Digital Techniques from Heriot Watt University who started his training in Engineering as an apprentice with Further Education at Stow College.  He has had an international career in IT, Telecommunications and Business Re-engineering, with time spent working for Nortel Networks and BT on major projects in North America, Continental Europe and the UK.

Now retired, Ed has worked with various public and charitable organisations, as Governor and Chair of Audit at South Devon College of Further Education, Member of the Diocesan Board of Education for the Church of England in Devon and Lead Governor of South Western Ambulance Service NHS Foundation Trust. Ed’s current appointments include, Chairman of the Veterans Advisory and Pensions Committee for West Scotland, a Non-Departmental Public Body. Ed also previously served as Non-Executive Board Member and Chair of the Audit and Risk Assurance Committee at the Student Awards Agency Scotland, (SAAS), an Executive Agency of the Scottish Government.