Glasgow’s children deserve a rich and varied early years education that reflects and enhances their experience of the world. The career opportunities generated by the expansion in the sector are already helping to attract a greater diversity of people into the childcare profession and Glasgow’s colleges are set up to support their ambitions. 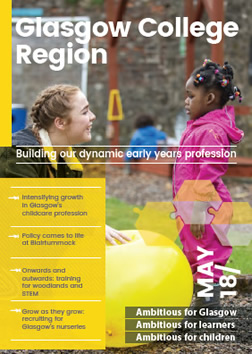 English for Speakers of Other Languages

Our ESOL programme at Clyde College includes students whose first languages include Arabic, Polish, Punjabi and Urdu. Some of these students have come to Scotland as refugees and, for them, building a new career, is part of building a new life.

Bilingual early years workers will be able to support children whose parents have a first language other than English. They will also be able to broaden the linguistic and cultural experiences of other children in their care.

By 2020, we expect to have introduced 16 number of people for whom English is not a first language into careers in childcare.

The Glasgow College Region is committed to building an inclusive and responsive early years community and is keen to recruit men into childcare. Our programmes help men to overcome the barriers to entering a profession that is widely perceived as a female domain.

Men have much to offer in an early year’s environment. Their very presence means that our nurseries better reflect society and their input can be of great value to children who do not have a male role model at home. Yet less than one percent of child care workers are male. The Glasgow colleges are working hard to close this gender gap.

City of Glasgow College, in partnership with the charity Men in Childcare, has been running courses, including part time and ‘blended’ learning options, since 2014. Next year, 50 men are expected to enrol in expanded part time HE studies, and the college will also offer a part time fast track National Certificate.

Lyall George made the jump from being a roadie travelling with bands all over Europe to working in a children’s nursery.

“If you can keep your eye on six members of a band, then taking care of children isn’t too dissimilar,” he laughed. “It is a job where you’ll never get bored. Whether you’re planning education activities, organising mealtimes or simply playing games, each day is just as varied.”

Lyall began with the college’s class aimed at introducing men into childcare, then progressed on to a full-time Level 7 course in childcare at the college which included a placement at a nursery in the city.

“It was a big career jump for me, but the college was amazing,” said Lyall. “The lecturers are there to help and guide and this was the most relaxed I ever felt in education.”

Grow as they Grow: recruiting for Glasgow

What the people say: students and professionals talk about early years